Another new theme for me! The children really liked it. I had a lot of fun.

This storytime season the children have loads of energy. So, now, before I do "Open, Shut Them" I have the children get their wiggles out by wiggling, jumping, turn around and doing jumping jacks. In fact, I also did a quick thing of that after we did the "Construction Worker Song." 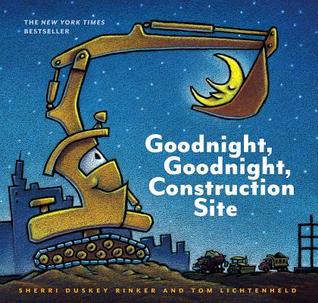 BOOKS
Goodnight, Goodnight, Construction Site written by Sherri Duskey Rinker and illus. by Tom Lichtenheld
This is such a cute little book. The children wanted to read this one first (we typically vote for at least one book). The children started acting like the construction vehicles and would fall asleep. They'd wake up and act like the next vehicle.

Who Made This Cake written by Chihiro Nakagawa and illus. by Junji Koyose
The children love anything with birthday cakes. At first they thought the little workers were normal human size and were just baking a giant cake. But some of them realized they were itty bitty workers who baked the cake.

Other lyrics
Saw the woo
Turn the screwdriver
Drill a hole,
Stack the brick,
Stir the pant
Paint the walls
Source: Storytime Katie

ACTIVITIES
Memory Block
I had a tape measure in the box and picture of tools.


Name Box
This time around I put the name tag shape in their craft box so that they could put it in the box after their craft. This worked out better than me handing them out.


Hard Hats
I have two hard hats from my grandpa. I let the children try on the hats after their craft. They looked so cute with their little tool belt craft.

STEAM ACTIVITIES
How Many Books Read/ Stories Told
The children are getting better at their math skills.


Today's Weather
We've been hit with crazy hot weather again in the middle of September. When asked the children were excited to tell me that it was Sunny and Super Hot!


Building Blocks
I have a bin of wooden blocks that were donated to my library. I brought them out and let everyone help build a fort for Abner the Owl. Pretty much it was only two girls who ended up playing with the blocks, which was awesome!


CRAFT
Tool Belts
I saw this craft idea over at Project I.Am.Amy (link here for a picture!) that included a downloaded printable for tools, which were so cute! I printed the tools on white card stock for the children to color. Then for the tool belt I used craft foam rectangles that had slits for the tools to be slipped into. I also hole punched the top corners so that we could tie some strings to it.


Images of the book covers were found on www.goodreads.com here and here.