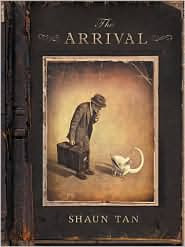 BOOK REVIEW
Leaving his wife and daughter behind in a bleak city that is haunted by large dragon-like creatures, a man journeys to a new world in search of a better life for his family. After going through the new city’s port that is reminiscent of New York’s Ellis Island, the traveler enters the new city that has a different language, food, architecture, technology and even different type of pets. The readers will follow him as he slowly learns to adapt to the customs of his new home and meet fellow immigrants and hear of their haunting stories of their old life. In this beautifully illustrated graphic novel, Tan tells this engaging story through his monochromatic pencil-drawn illustrations, which resemble sepia-tone photographs and are presented in square panels four six to twelve per page, which captures the deep emotions of our protagonist, and in double-page spread that exhibits the great and innovative cityscape with its hot air balloon transportation, mailboxes that will fly away once you deposit your letter, and much more. Readers of all ages will enjoy the engaging illustrations while older readers will understand story and emotions that evokes the memories and feelings of the thousands of people who have immigrated to a land in hope of a better life and who have found the welcoming warmth of those who have come them.

CONNECTIONS
*Have the readers discuss how the story parallels the stories of immigrations, e.g. the Irish immigration to America during the Great Potato Famine in 1848-1852.
Posted by Dorothy at 10:59 PM No comments: BOOK REVIEW
Artemis Fowl the Second is a twelve-year-old prodigy, criminal mastermind and heir of the Ireland’s Fowl Empire crime family. After the disappearance of his father Artemis Fowl I and the loss of the family fortune to a failed trade attempt with Russia, Artemis II is determined to replenish the family’s fortune and after a great deal of research has discovered the existence of fairies (a.k.a. the People) the their magic. After persuading a fairy found in Vietnam with the help his bodyguard Butler, Artemis obtains a copy of The Book of the People, the fairy’s book of magic, and cracks the gnomimish code with a computer program. However, his plan to steal the People’s gold isn’t strong enough and kidnaps Holly Short, the first female elf to work for LEPrecon (Lower Elements Police Reconnaissance) Unit and hold her for ransom. The actions that ensue as the People attempt to save Holly and their gold from Artemis bring to mind an adventure of James Bond with the innovative use of technological gadgets and is mixed with a great sense of humor. As the story comes to end with the threat of the fairy’s Bio-Bomb that will destroy all biological life in the Fowl Manor, readers will come to realize that the anti-hero Artemis has his flaws like everyone else and chooses to save his family in exchange for the ransom gold. An excellent chose for readers who search for a mixture of technological adventure and a bit of fantasy.

Fantasy: The Children of Green Knowe

BOOK REVIEW
A midst a flood, young Toseland arrives in a rowboat to the ancient house of Green Knowe where his great-grandmother, Mrs. Oldknow, resides. Tolly, as he is soon nicknamed, becomes instantly enchanted by the mysterious and magical house and its surroundings. He is particularly drawn to the portrait of two ladies and three children, who were all once Green Knowe’s residents many generations ago. Through Mrs. Oldknow’s stories of the three children (Toby, Alexander and Linnet) that weave together the magical tapestry that crosses time and space, Tolly begin to discover that the children have never truly left Green Knowe after all these years. Inspired by her time and love worn manor house near Cambridge, England, Lucy M. Boston’s eloquent and sophisticated level of writing brings together the story of a boy, who’s father and stepmother tend ignore, finding a kindred spirit connection with a great-grandmother that he never met and the three children as he learns the rich history of the house and of his ancestors. The sprinkling of biblical and Anglo-Saxon mythology and the occasional detailed black and white illustrations by the author’s son add to the overall appeal of this treasured book. Originally published in 1954, Boston’s first book of the Green Knowe Chronicles continues draw readers all generations into its magical charm.

Fantasy: The Lion, the Witch and the Wardrobe 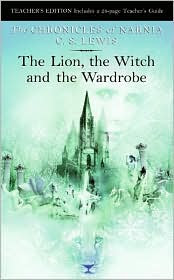 BOOK REVIEW
Captivating readers of all ages for over fifty years, C.S Lewis has brought to life the magical world of Narnia and its many inhabitants through the eyes of the four Pevensie children. Having been evacuated to the English countryside during World War II Blitz, Peter, Susan, Edmund and Lucy Pevensie find themselves in a large house owned by Professor Kirke, and while exploring the house, young Lucy finds, in the back of the wardrobe, an entrance to another world and meets the faun named Mr. Tumnus. Despite their initial disbelief when Lucy recounts her discovery, the older siblings and Lucy finally find themselves in Narnia and soon discover that they are part of the ancient prophecy that is bring the reign of the White Witch to an end. As they journey through Narnia the Pevensies meet creatures of all sorts and experience betrayal, loyalty, death, resurrection and redemption as they join with the great lion Alsan, king of Narnia, to save the mystical land. Combining Norse and Greek mythology and influences from the Bible, Lewis’ has given the human world an amazingly detailed and engaging fantasy story that has withstand the span of time and continues to bring readers into his magical world.

CONNECTIONS *Continue the to be entranced by The Chronicles of Narnia with:

*Read the Chronicles either by publication order (as above) or by chronological order according to Narnia:

Posted by Dorothy at 6:34 PM No comments: 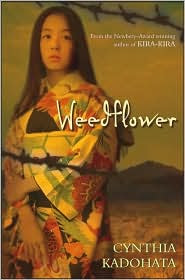 BOOK REVIEW
Japanese-American Sumiko (Weedflower) live with her extended family in southern California and works on her aunt and uncle’s flower farm. Being in the only Asian in her sixth-grade Sumiko was the subject of prejudices but found comfort in being with her family. However, the day after she was turned away at the door to a classmate’s birthday party that she was invited to, her world changes when Japan attacks Pearl Harbor and America declares war. Now she, her family and all other Japanese (including American-born) are viewed by all with suspicion, and they soon find themselves being shipped to an the Colorado River Relocation interment camp in Poston, Arizona. Struggling with the isolation, fear, confusion and the boredom, Sumiko begins to find comfort in creating a small flower garden and a budding friendship of Frank, a Mohave Indian whose reservation is being used for the camp. Drawing these amazing details from personal interviews with survivors and the extensive research, Kadohata has created an amazingly compelling narrative about America’s World War II history and one girl’s coming-of-age as she searches for cultural acceptance. An excellent and resonating source for readers to learn about America’s World War II history and civil rights of Japanese-Americans.

BOOK REVIEW
Twelve-year-old Nory Ryan lives with her granda, two sisters, and little brother on the west coast of Ireland in 1848. With the harsh treatment of their English landlord many, including Nory’s eldest sister and husband, begin to leave for America where no one is hungry and were they are free from the English. While her da (father) is away at sea earning money for food and rent, the potato blithe from the north creeps into the Nory’s family and neighbor’s fields and poisons the crops. As she watches her family and neighbors continuously affected by the diseased potatoes that were once the staple in their livelihood, Nory refuses to give into the hunger and despair. Using her resourcefulness she courageously scales down cliffs for eggs and birds to feed her remaining loved ones. Inspired by her own great-grandparents’ story of emigration to escape the famine, Giff brings to life in the Irish culture through the eyes of a young girl and the vivid details of fear, hunger, and the courage that everyone faced during Ireland’s Great Hunger of 1848-1852. With a glossary of Irish words and a heart-felt letter from the author makes this an enlightening book for all to love and learn from.

CONNECTIONS
*Continue the story of Nory’s journey to America in Maggie’s Door.
*Read more of Giff’s books like: Lilly’s Crossing, All the Way Home, Willow Run, and Water Street.
Posted by Dorothy at 9:04 PM No comments:

BOOK REVIEW
In this lovely historical fiction set on a Bahamian island in 1492 the readers are given an pleasant look into the lives of the Taino Indian siblings Morning Girl and Star Boy and their family. Alternating between chapters, Morning Girl and Star Boy share three intertwining occurrences that affect their entire family: the loss of a baby sister during birth, a hurricane that nearly blows Star Boy away, and Star Boy earning acceptance of his adult name from the community. In the final chapter, Morning Star greets a large canoe full of strangers to the island. Little does she know, as readers will discover in the epilogue, that these visitors are non other than the explorer Christopher Columbus and his men to claim the island and indigenous people. Eloquently written, the entire story flows like a soft morning tide on a quiet beach and describes the beautiful harmony of how these pre-Columbian people live as one with nature rather than overshadowing it as well as the sharing the cultural importance of names, celebrations, and food. Readers with brothers and sisters will find connection with Morning Star and Star Boy as they grow up as individuals, accepting their differences, and as they put aside their sibling rivalry. A pleasant addition to any Native literature collection, Morning Girl that provides a unique look into the time before the world changed with the coming of explorers from the Old World.

CONNECTIONS *Read Michael Dorris’ other books: Guests, See Behind Trees, and The Window.
Posted by Dorothy at 7:56 PM No comments:

BOOK REVIEW
Twelve-year-old Sarny, a slave on the Waller plantation, knew what happed to slaves if they were overheard calling their owner “pig slop,” or were caught praying aloud, and if they attempted to runaway. If slaves were to know how to read and write, according to her mammy, they would be whipped till their skin hung like rags or they would lose their thumbs. But when Nightjohn, a new slave who had successfully escaped to freedom but returned to educator others, arrives, she agrees to exchange tobacco leaves for learning letters and words. In her newfound ability to read and write, however, Sarny is caught and as result her loved ones are punished. Based on true happenings and as told through the compelling dialect narrative of a young girl, Paulsen’s powerful and authentic book brings the harsh and grim reality of the treatment of slaves during the America’s pre-Civil War past and the story of how the strength of the human spirit and the power of literacy can never be crushed.

CONNECTIONS
*To find out what happens to Sarny read Paulsen’s sequel: Sarny: A Life Remembered.
*Read more historical fictions like The Slave Dancer by Paula Fox,
Posted by Dorothy at 5:54 PM No comments: