It's Banned Book Week, people! From September 25 to October 1 it's time that we need to celebrate our 1st Amendment Rights freely read what we want to read (though we should do it every single day of our lives)! Every year books for children and adults face the risk of being challenged if they one small element that is not agreeable to one person or to a whole group. This when I truly love working in a public library where I can be surrounded by books that match the interest and beliefs of every one who have all types of walks of life. This does not mean that the library does not receive book challenges, but the right to Intellectual Freedom is on our side!

Check out the Office of Intellectual Freedom's video about the Top Ten Most Frequently Challenged books of 2009. This is an excellent and simple video to illustrate what is being challenged:

Want to learn more about Banned Book Week? Check out the American Library Association (ALA) web pages that share all sorts of information about Intellectual Freedom and explore their lists of books that are challenged (and not necessarily banned). ALA tabulates the most challenged books every year. If you don't have the time to view the video above here what has made Top Ten Most Frequently Challenged books of 2009:

8. The Earth, My Butt, and Other Big, Round Things by Carolyn Mackler
Reasons: offensive language, sexually explicit, unsuited to age group

To learn how ALA tabulates these titles please visit their web page Frequently Challenged Books. Also, to learn about some of the reason and history of these books being challenged, ALA also has a page detailing the Reasons for Challenges to Classic Books like Catcher in the Rye.

Though technically many of the books listed in the past during Banned Book Week have only been challenged; however, you would be surprised or even intrigued that learn that many of the books appear on the lists do to it being banned in other countries or were burned either in the USA or during the Nazi book burnings.

The majority of the books challenged on this list as well as the ones that I have faced in my profession have been for teens of all ages and younger children. Just because one person does not agree what the story is about or how a situation handles, or how one family/neighborhood is portrayed in a book does not mean that it is completely fictional and needs to be challenged. There are so many walks a lives that all these books will be of interest and could create a connection to anyone and everyone.

Celebrate our freedom to read and READ A BANNED BOOK!
"Think for yourselves and let other enjoys the privilege to do so too" ~ Voltaire, Essay on Tolerance
Posted by Dorothy at 10:29 PM No comments:

Barry the Fish with Fingers 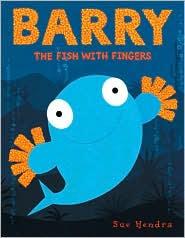 BOOK REVIEW
What could a fish do if it had fingers? Many things! - according to a round and blue fish named Barry that is. Readers are initially introduced to Sea Slug and all the different type of fishes under the sea, but that story changes focus when Barry appears with bright orange fingers at the end of the fins. With his new phalanges, Barry can play with finger puppets, knit a scarf, play the piano, finger paint and tickle. But perhaps the most important thing that he could do was point and shout a saving warning of "Look out!" when a large box landed on the sea floor. After being saved from being squished, one little green fish ask the question on everyone's mind - "...where can we get some of these fingers?" As it turns out, Barry's amazing digits were not spontaneous fin growth, but fish sticks, and the box that floated down to their world was a crate of "Pirate Jack's Tasty Fish Sticks." Now everyone can have some fun. The overall plot is nothing too deep, and fact that Sea Slug has seen all kinda of fishes under the sea is incidental as the book more for pure entertainment and use of our silly imagination. The colorfully bright and clear gouache illustrations fill the pages. The contrast of a blue Barry and his bright orange and crispy looking fingers is wonderfully humorous, and the children will like all the different type of fishes. Be prepared or the one child in the group to say, "But fish sticks are made from fishes!". A fun read nonetheless for storytime or just during some silly time. Remember to read it with some gusto!

CONNECTIONS
*Have the children share what other things a fish could do with fingers.
*Invite the children to create their own fish with fingers picture
*While reading to a group like in storytime, remember to ask the children questions like "Do fish have fingers?" and etc.
*If you are allowed food in your room, share a small meal of fish sticks (along with some fruit!) *after reading the book.
Posted by Dorothy at 8:42 PM No comments: 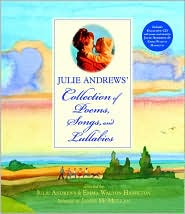 INTRODUCTION
The month of September marks a number of things in the life of everyone. After Labor Day marks the end of summer and the beginning of schools and there will be now holidays until Thanksgiving. September is also when we will find the first day of Autumn, which is very much a welcomed season after a hot summer. Everyone, especially for all the Texas folk right now after our hot, hot, HOT summer and the soggy week so far, love and savor the words and images in this poem from a classic poet.

The breezes taste
...Of apple peel.
The air is full
...If smell to feel-

The bee, his hive
...Well-honeyed, hums
While Mother cuts
...Chrysanthemums.

Like plates washed clean
...With suds, the days
Are polished with
...A morning haze.

EXTENSION
After sharing this poem have the children volunteer to share what they think of the month of September and what it means to them. They can present their thoughts in poetic form or it could be just a list. It could even be both - a list poem!