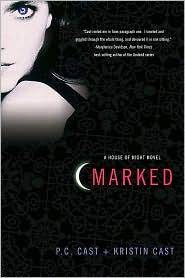 BOOK REVIEW
Changes in life can be hard, especially if you are unexpectedly “marked” as a fledgling vampyre and have to change schools. Leaving her friends, boyfriend and not-so-nice family behind, Zoey begins her new life as a fledgling at the House of Night to learn to become an adult vampyre. Of course, that is if she makes it through the change, which not all do. On top of a new school and making new friends, Zoey discovers that she has been chosen to have a special connection with the vampyre Goddess Nyx and rapidly develops new powers that fledglings normally don’t have. Life at the House of Nights gets mysterious when she discovers that the leader of the Dark Daughters is misusing her powers and she must set things right. As a mother and daughter team, P.C. and Krisitn Cast’s writing has the exciting and humorous touch of how teenagers would speak and think. Along with the usual dramas of teenage life Marked is also includes with mysteries and great action. The unique touches to the vampires themselves, especially the tattoos they develop as an adult vamp (or in Zoey’s case when the Goddess Nyx is pleased with her actions), their history, and bloodlusts that develops when feeding on others, adds to the new views of vampires in literature. Set in their hometown of Tulsa, OK, the authors also include well-rounded characters who are friends, or enemies, of Zoey and allow references to pop culture to make them more real to the readers. Being the first book of the currently five-book House of Night series about Zoey’s life and continuously unique drama that is full of twists and turns, Marked is growing in popularity and competition among the ranks of vampire literature and is an extremely welcomed addition to the subgenre and will draw the readers in.

CONNECTION
*Continue to follow Zoey’s story with the other books in the House of Night series: Betrayed, Chosen, Untamed, Hunted and Tempted (coming October 2009).
*Have a House of Night event and let the participants create their own tattoos.
Posted by Dorothy at 9:36 PM No comments: Links to this post 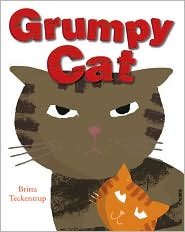 BOOK REVIEW
Cat is grumpy. He sits between his trash cans alone, he eats alone, and he sleeps alone. However, Cat is also a lonely cat as he doesn't know how to join the other cats to play. Then when night, during a thunderstorm that leaves him wet and cold, a Kitten appears. Despite still being grumpy and trying to lose her, all of the brown and black stripped Cat is constantly followed by his new and unwanted friend Kitten. The orange and brown stripped kitten tries to play with him, wiggles her tail under his nose, pulls his tail and shows him her soft tummy. However, Cat is still grumpy until Kitten nearly falls out of a tree. This is a short and simple story of how a friendship is formed that young readers will like. The illustratrions are a combination of bold and soft and are graphically tectured what brings to mind that of other artists like Eric Carle, though less bold and colorful and more realistic. The young readers will like the grumpy look of Cat and the playfullness of Kitten. With the combination of the oversize bookform, lovely illustrations, and the clean text, young readers are sure to enjoy.

CONNECTION
*Ask the readers if they were ever grumpy until one of their friends came to visit or when a new friend came a long.
Posted by Dorothy at 10:14 PM No comments: Links to this post

BOOK REVIEW
It's the first day of school and Dinosaur, a bright orangey-red Stegosaurus, is full of worry and doesn't want to go. However, his little human companion offers him reassurance. The story is cleverly written through a series of "What if..." questions like "What if you were painting pictures of the sun but Dinosaur made a big mess? What if his bight dinosaur eyes filled with tears and he began to cry?" and "What if it was time for lunch but Dinosaur said in his worried dinosaur voice, 'They might give us something yucky to eat.'" All the while, his friend offers answers to all the questions and makes Dinosaur at ease until they meet new friends another boy with a Triceratops who also are struggling with the first day of school. The illustrations are colorful and charming. All the children wear an array fun, retro style clothes and are an mixture of skin tones and hair styles (the young friend of dinosaur has a cool up-swoop hairdo). The pages are filled with color and action that will equally entertain the readers. This is an endearing story of the first-day-of-school jitters that many children will relate to, especially to those who love dinosaurs or have an imaginary animal friend. This is a must for all public and school libraries and is perfect for a storytime.

CONNECTION
*Ask the children if they had a dinosaur who started school, what would you tell them if they were scared? What type of dinosaur would it be?
*Do a dinosaur craft.
*Other stories about going to school like Wemberly Worried by Kevin Henkes and How do Dinosaurs Go to School? by Jane Yolen and illus. by Mark Teague.
Posted by Dorothy at 10:07 PM No comments: Links to this post