The Year We Disappeared: A Father - Daughter Memoir 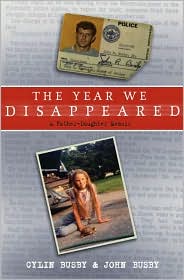 BIBLIOGRAPHY
Busby, Cylin and John Busby. 2008. The Year We Disappeared: A Father-Daughter Memoir. NY: Bloomsbury. ISBN: 9781599901411.
BOOK REVIEW
"When my dad dies, his body will go to the Harvard Medical School at Massachusetts General Hospital in Boston, though I suspect they are mostly interested in his head." This is how Cylin Busby starts this compelling memoir in the prologue. One August night in 1979 Cylin and her whole family's lives are dramatically changed forever when her father, a policeman, on his way to work, is brutally shot in the face. Before that night, Cylin was a normal nine-year-old who was grumpy that her dad was not able to take her and her brothers to see The Muppet Movie that night and having fun with friends and pet box turtle. However, now with 24-hour armed protection against the man who shot her dad and may possibly be coming for the rest of things aren't as great. Written in alternating chapters, Cylin and John effectively tell their story from their points-of-view filled with emotional differences: Cylin a confused and scared child as she quickly grows up and John an angry man who is frustrated with the corrupt system and wants revenge. Readers will be caught up in the story from the very beginning as it doesn't waste time getting to the story and its bloody and frightening details. However, as John, while in hospital for numerous surgeries, reminisces to days when he first became a cop, the good men that he worked with, and the instances with local criminals who he knew were involved with his is shooting, which can drag the story on for some readers. Plus, the names of those who were invovled in shooting were changed, which can be confusing to some when doing research outside of the book. Despite the select few slow spots, the readers will stay with the story of the Cylin and John through the raw emotions of the horrible crime and its aftermath up to the very end when they begin their new life. A "where they are now" epilogue is included and helps answer one important question: Do the Busbys ever get justice and the perpetrators are caught? An engrossing and unique memoir that is a great edition to all teen library collections.

CONNECTIONS
*Encourage the readers to learn John Busby and his support of bill to extend the statue of limitations, which directly involves his case as it rain out by the time those involved in his shooting confessed.
*Encourage them to share in what they would've felt like if they were in both Clyn and John's shoes.
*Encourage them to discuss what they thought about the police and justice system years ago. Have things stayed the same or have they changed?
Posted by Dorothy at 6:35 PM No comments: Links to this post

The Black Book of Colors

BOOK REVIEW
How would you describe colors if you couldn't see? In Cottin and Faría's innovative book The Black Book of Colors wonderfully shows us how. Thomas, an unseen boy, describes the colors through his five senses of sight, taste, smell, touch, and hearing. Each color is beautifully described. To him the color red is "sour like unripe strawberries and sweet as watermelon. It hurts when he finds it on his scraped knee," green "tastes like lemon ice cream and smells like grass that's just been cut," and yellow "taste's like mustard, but is soft as a baby chick's feathers." The best and ingenious feature of this book is the choice of format and color. The book's only color beyond the white text is black. For each double-page spread one page is dedicated to words and the other two the "illustrations." The illustrations are actually glossy embossed images, e.g. strawberries for the color red, feathers for yellow, rain waves of fine lines to describe the flowing black hair of Thomas' mom. The glossy parts of the page catch the light enough for you to see what the images are and entices you (and you will not be able to resist) to put your fingertips all over the page. Along with the white text, the book also includes a Braille translation that allows even visually impaired readers to enjoy the read. At the end of the book a Braille alphabet is provide to further help educate those new to Braille. This is a wonderful book to use in a classroom setting to teach the concept of how people who are visually impaired can read and also a great way to think about how to describe colors and everyday things. It is also a simple yet creative way to start kids to think about things in another perspective. A highly recommended book for public and school libraries.

CONNECTIONS
*After the story is told, encourage the kids to take turns feeling all the pages in the book. Even ask them to close their eyes when they do.
*Have the kids describe what each color is like as Thomas does in the book.
Posted by Dorothy at 6:29 PM No comments: Links to this post